molecule can be turned into a coherent two-level quantum system.

Researchers at Max Planck Institute for the Science of Light and Friedrich Alexander University in Erlangen, Germany have recently demonstrated that a molecule can be turned into a coherent two-level quantum system. In their study, published in Nature Physics, they placed an organic molecule inside an optical microcavity and found that it behaved as a coherent two-level quantum system.

"Organic molecules have been studied and applied in various contexts for many decades," Vahid Sandoghdar, the head of the research team, told Starckgate "Our research group has been interested in using them in quantum optical measurements, which have traditionally been done on atoms in a vacuum chamber."

Sandoghar and his colleagues found that an organic molecule placed into an optical microcavity actually behaves as a coherent two-level quantum system. This enabled the researchers to extinguish 99% of a laser beam with a single molecule.

The remarkable efficiency of this interaction also meant that they could saturate a molecule by about only 0.5 photon, whereas one usually requires a considerable amount of power to achieve saturation. The nonlinear nature of this effect was also manifested in non-classical generation of a few-photons of super-bunched light.

"The great advantage of our system is that a single molecule sits at exactly the same place in its surrounding crystal for days and weeks, whereas a single atom is usually kept on time scales of the order of seconds only," said Daqing Wang, who did his doctoral research on this project. 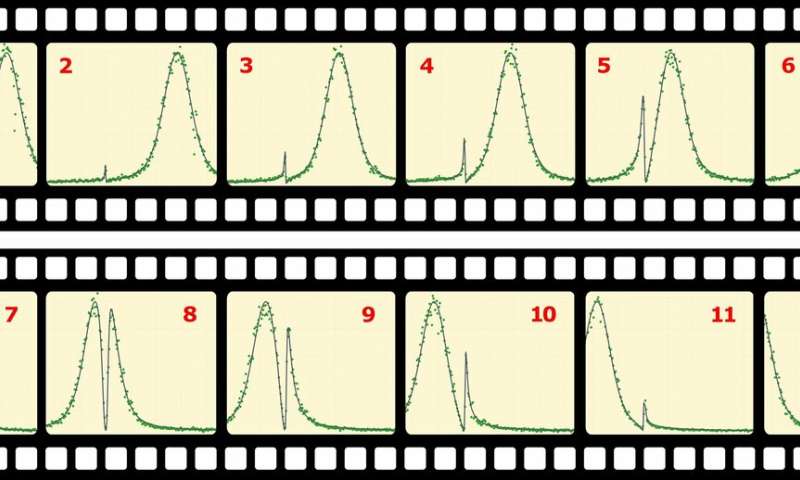 An individual molecule has several vibrational energy levels, which provide multiple decay channels for its excited state. To turn a molecule into a two-level quantum system, the researchers had to speed up one of these transitions to such an extent that the molecule's decay rate to the other levels would become negligible. In other words, this process prevented the molecule from decaying to levels that the researchers did not want it to go to.

"To make this happen, we have enclosed the molecule in a cavity consisting of two mirrors separated by a very small distance in the order of one micrometer," Wang explained. "The transition of choice is resonant with the cavity so that a photon can go back and forth many times, in our case several thousand times."

The researchers carried out their experiment at about 2 Kelvin, to ensure that thermal agitations of the crystal didn't affect its interaction with the laser light. In addition to showing that a molecule can act as a coherent two-level quantum system, they demonstrated that their molecule-microcavity system could interact with single photons generated by a second molecule in a distant laboratory.

In the future, the study carried out by the team of researchers at the Max Planck Institute could enable the development of linear and nonlinear quantum photonic circuits based on organic platforms.

"What we have shown so far is that we can really interact a single photon with a single molecule in an efficient manner," Sandoghdar said. "We are now working on doing that on a chip and then extending it to a quantum photonic circuit, where many molecules are connected via nanoscopic waveguides."